Why Reshoring Could Create an Automation Boom in 2023

After more than two years of severe disruption, global supply chains are finally normalizing. However, it is increasingly clear that the globalization bonanza that was in process during the decades leading up to the pandemic may not return any time soon. In contrast, policymakers and business leaders in the west have made reshoring a priority in order to simplify and localize supply chains and combat rising costs. We believe this trend will create a major automation boom in 2023 and future-focused investors should take note. 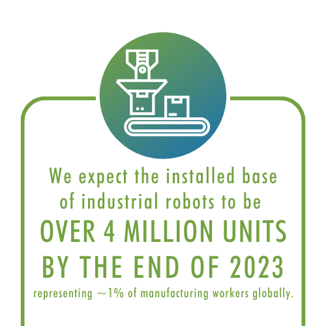 Robotics adoption is a key enabler of competitive manufacturing, and despite inflation and other economic challenges, business leaders are spending unprecedented amounts on automation technologies. In the second quarter of 2022, robotics orders in North America expanded by 25% to a record high of over 12,300 machines after growing by over 28% in the first quarter.

An increasing number of manufacturers are moving a portion of their operations back to North America. Among the challenges that accompany this shift is attracting talent for manufacturing jobs. According to the 2021 Deloitte and The Manufacturing Institute Manufacturing Talent study, there are now more than 500,000 open manufacturing jobs in the U.S., which could rise to 2.1 million by 2030. By relying on industrial automation technologies, companies can minimize the economic impact of transplanting their operations while maintaining product quality, increasing efficiency and throughput, and alleviating labor shortages.

Following the passage of these bills, billions of dollars in capital investment plans were announced by chipmakers, automobile manufacturers, and battery manufacturers alike. According to The White House, $50 billion in additional investments by companies in American semiconductor manufacturing has been spurred thanks to the passing of the CHIPS and Science Act of 2022.

Micron announced a $40 billion investment in memory chip manufacturing through the end of the decade to build leading-edge memory manufacturing in multiple phases in the U.S., creating up to 40,000 new jobs in construction and manufacturing. Qualcomm (ROBO: QCOM) and Global Foundries announced a new partnership in August 2022 that includes $4.2 billion to manufacture chips in an expansion of Global Foundries’s upstate New York facility. Qualcomm has announced plans to increase semiconductor production in the U.S. by up to 50% over the next five years.

One of the goals of the Inflation Reduction Act and the CHIPs Act is to increase self-sufficiency in two of the most important commodities of our time: energy and semiconductors. We believe the robotics and automation industry will be a prime beneficiary, as subsidies are accompanied by beneficial requirements. For example, manufacturers may be required to produce batteries only in the U.S. This bodes well for job growth and local economies, as well as for the individual companies in this space.

The transition to electric vehicles in 2023 is creating heavy demand for robotics. The reason is that manufacturing EVs involves significantly more robotics and automation technology than combustion engine cars. This is magnified when manufacturing electric power trains and batteries. Automakers are scrambling to retrofit production lines to catch up in the U.S. market, where EV penetration of ~7% is trailing significantly behind China (25%) and Europe (10%). The top players target a 40% share of EVs by the end of the decade. The innovation includes industrial robots, control systems, computer vision, and software.

At the 2022 International Manufacturing Technology Show, many executives mentioned EV and battery production as important demand drivers. Specifically, the IRA granted $2 billion in subsidies for retooling existing auto plants and $20 billion in loans for new factories.

For future-focused investors looking to tap into the 2023 automation boom and beyond, the ROBO global innovation portfolios provide global, diversified exposure to the growth occurring across robotics, AI and healthcare technology. Download our full 2023 trends report here.