If you cannot see the form above, you may have an ad blocker preventing it from loading.
Please disable the ad blocker and refresh the page.

ROBO Global uses this information to keep you up to date on the latest
investment insights and technology trends. You may unsubscribe from these
communications at any time. For more information, check out our Privacy Policy.
If you cannot see the form above, you may have an ad blocker preventing it from loading.
Please disable the ad blocker and refresh the page.

With nurses in short supply, eldercare robots are coming to the rescue

A shortage of nurses is already taxing an already stressed healthcare system, and there’s seemingly no end in sight. According to the American Nurses Association, there are currently about three million nurses in the US—about one million short of the number that will be needed to provide sufficient care for the fast-growing population of elderly men and women requiring care in the next five years alone.

Dr. Manish Kothari, President of SRI Ventures and a ROBO Global strategic advisor, sees eldercare robots as an obvious solution to the problem. “Two facts are clear: there will always be a need for regular nursing teams, and there will also be a severe shortage of such skilled labor. Advancements in robotics and AI are turning healthcare support and virtual nursing from concept into reality at just the right time,” says Kothari. “Augmenting human teams via eldercare robotics and AI is one of the most efficient ways to increase the quality of care for the elderly and fill that gap.”

Japan is already putting the latest technologies into action. To help fill the country’s projected shortfall of 380,000 specialized healthcare workers by 2025, the country has been aggressively funding the development of eldercare robots. These robotic caretakers are now being used to support Japan’s overburdened healthcare workforce by helping manage medical adherence, providing much-needed entertainment and companionship, leading exercise and rehabilitation programs, and more. Here in the US, the shortage of nurses makes this approach a mandatory next step for us as well.

This perfect storm has been brewing for decades. As more baby-boomer nurses reach retirement age each year, a mass exodus has created a healthcare workforce shortage of critical proportions. According to the AMN Healthcare 2017 Survey of Registered Nurses, the percentage of nurses planning to retire in less than a year jumped to 27% in 2017—up more than 10% from 2015. And the US Bureau of Labor Statistics has predicted that there will be more than 600,000 job openings every year for healthcare practitioners and technical healthcare occupations over the next decade. That’s a huge problem, because US nursing schools simply aren’t able to fill the gap.

According to Robert Rosseter, spokesman for the American Association of Colleges of Nursing, "There's tremendous demand from students who want to enter nursing programs, but schools are tapped out." With the educational system at maximum capacity, US nursing schools are turning away tens of thousands of potential nurses every year; nearly 60,000 qualified applicants were rejected from undergraduate nursing programs in 2017 alone. 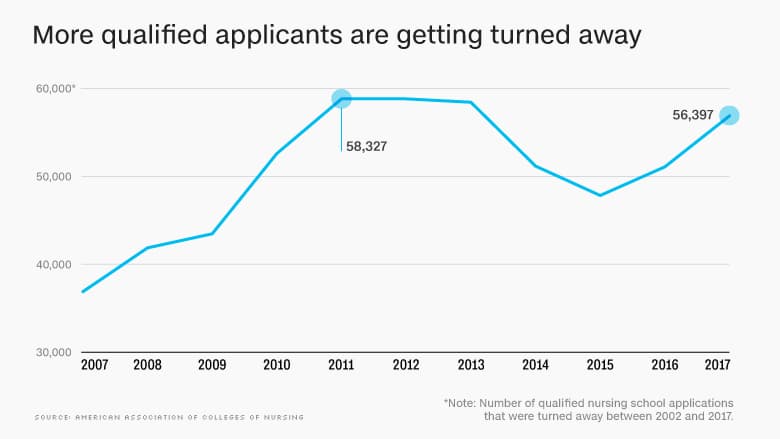 AMR Healthcare believes these numbers should be an industry wake-up call. “The healthcare industry will need solutions to cope with this impending crisis.”

This is precisely where Japan’s model can help. Japan is already far ahead of the US in its efforts to tackle the challenge of caring for a growing elderly population. That should come as no surprise, considering that Japan has the highest proportion of elderly citizens in the world. According to 2014 estimates, 33.0% of the Japanese population was above the age of 60, and people 65 and older made up a quarter of its total population. By 2050, over 38% of Japan's population will be over the age of 65.

Those are big numbers, and the US is heading in the same direction. By 2050, 21% of the US population will be over the age of 65. Luckily for our own elderly population, Japan can teach us a thing or two about how to manage the eldercare workforce shortage that, for us, is just around the corner.

Robots to the rescue

Today, a fleet of 20 different models of robots helps provide care for elderly residents at Tokyo’s Shin-tomi nursing home. Paro, a robotic pet seal created at the National Institute of Advanced Industrial Science and Technology, provides companionship. Pepper, a humanoid robot by SoftBank, leads gentle workout classes designed just for seniors. Reif Co’s Tree crawls along the ground to offer rehab patients with physical support and guidance, and even coaxes them along with words of gentle encouragement. And Cyberdyne Inc’s HAL, a Hybrid Assistive Limb “suit” that the FDA approved for use in the US in March, gives caregivers the robotic muscles they need to lift and move patients from bed to chair to bath with ease.

The Japanese government hopes Shin-tomi will be a model for how the country can use the latest advancements in robotics to help manage the precarious combination of a shortage in healthcare workers and a rapid increase in its aging population. It’s a fascinating look into our own future.

These are early days for robotic-assisted care, but if it does indeed become the new standard for eldercare in Japan, the US, and elsewhere, it’s poised to be a catalyst for tremendous and rapid growth in the global market for robots that provide nursing care and disabled aid to patients. At the moment, Japanese manufacturers dominate the relatively small $19.2 million market for these specialized robots.[1] But to meet the eldercare needs of Japan alone, that number is expected to grow to about $3.8 billion by 2035. Considering the potential for global use, that number is likely to escalate exponentially.

Robots will never fully replace human caregivers, but Japan’s use of eldercare robots is certainly offering an important path toward more effective patient care, especially in the face of the US nursing shortage. That’s great news for patients of every age—and great news for investors who understand just how vital these robots will be for addressing growing healthcare needs around the globe.