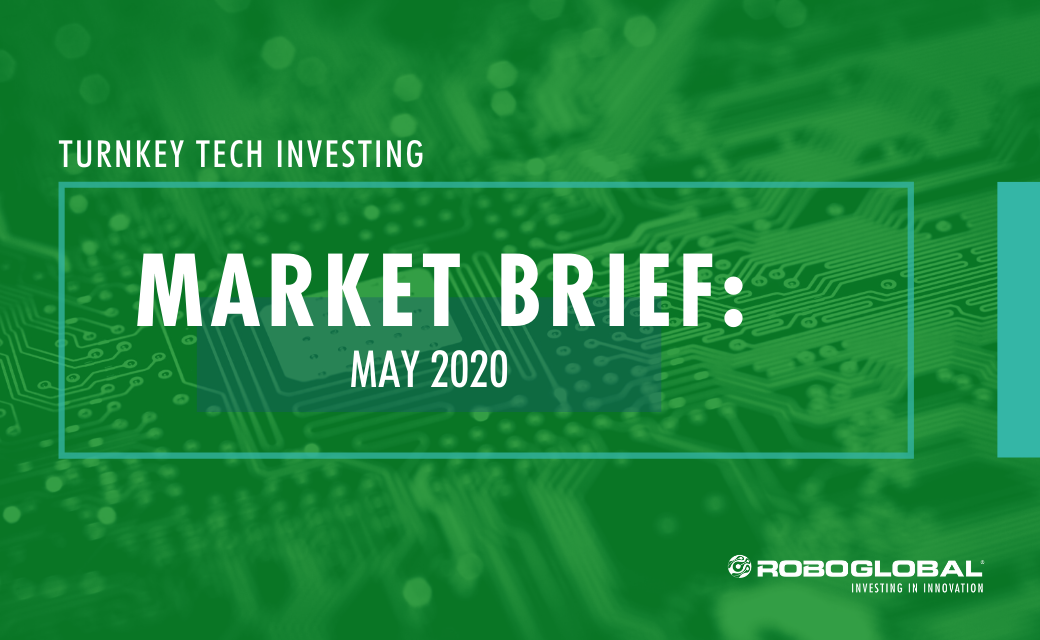 Before the current health crisis, I discussed the ‘wall of worry’ that the market had overcome as it climbed its way to all-time highs back in February. But as the coronavirus continues to linger, that proverbial ‘wall’  is starting to feel more like a ‘cliff.’ 40 million Americans have been without jobs since mid-March, stimulus checks are beginning to dry up, and the $600/week unemployment boost is due to expire at the end of next month. At the same time, market concentration is sitting near all-time highs, normal visibility into fundamentals has all but vanished, tensions between China and the US have been reignited, and nations around the globe are struggling to navigate re-opening in the absence of a vaccine. Suddenly the typical market angst before a US Presidential Election seems like a side note.

Despite these many uncertainties, the ROBO index advanced +9.5% for the month of May, HTEC index advanced +8.4%, and the THNQ index rallied +13.2% vs. an ACWI gain of 4.5%.  As investors continue to grapple with value vs. growth, we like how we are positioned. Why? Value isn’t the only signal of rotational trends that we’ve been watching make meaningful shifts. Since March 18, small caps have outperformed their large-cap peers by a significant margin—the best stretch for this group over any equivalent timeframe since 2002. Investors appear to be warming up to early-cycle trades, and market breadth is improving, both of which align well to support a sustained small-cap rally that includes many of the constituents in the ROBO index that have already been buoyed by high levels of stimulus directed at small/medium businesses. Even as growth vs. value may be continuing to hang just short of all-time highs, tilting hedge fund preferences toward small caps illustrate that some rotational moves are still taking place. If the slowing of the virus continues as hoped in the months ahead, we anticipate buoyancy throughout the summer as this “sweet spot” of the 2nd derivative gains legs given sequential improvements on a week-to-week basis. One could argue (and I certainly do) that this will enable a rotation where cyclicals—whose expectations have been thwarted the most since the correction in March—could reap benefits.

As we move into June, multiple defense tactics are in place to help mitigate the spread of the virus and stabilize the economy. Global governments, Central Banks, and healthcare and essential workers continue to work tirelessly to keep us on the right track in “flattening the curve” and “dampening vol,” and the next few weeks are critical. Of the 110 vaccine candidates under development, 8 are now in clinical studies. Some analysts estimate that about 6 of these candidates (4 of the current clinical candidates and 2 preclinical candidates) have a reasonable likelihood of clinical success and the ability to be manufactured at scale. At the moment, we see three waves of potential commercially available vaccines, with those from Moderna (MRNA), Pfizer (PFE)/BioNTech (BNTX), AstraZeneca (AZN LN)/University of Oxford, and CanSino (6185 HK) likely in the first wave before the end of 2020. We could also see vaccines from Johnson & Johnson (JNJ) in 1H21 and Sanofi (SAN FP)/GlaxoSmithKline (GSK LN) in 2H21.

From an economic perspective, rapid, global coordination of fiscal and monetary policy are the key to ‘curing’ what ails the financial markets. Here’s a brief look at how the US is tackling both areas of policy:

If anyone questioned Congress’s focus and the Fed’s resolve to act quickly and aggressively, those doubts have been solidly put to rest. It seems that this “whatever it takes” mentality is quickly becoming a global phenomenon: the EU recently enacted its own policies, and the Bank of England is contemplating negative interest rates for the first time in its 326-year history.

As cities in the US and around the world begin to reopen, two sets of improving data are mandatory for success: the numbers of coronavirus cases and deaths must continue to decline, and global economic data must continue to improve incrementally. As we have stated time and time again, robotics and AI—the fundamental components of the ROBO Global Index Series—are on the front lines of fighting this pandemic, and they are actively creating new industries and, indeed, a new economy. While these technologies may not be the ‘cure’ for every challenge we face today, robotics and AI are forming the foundation for the strongest possible post-pandemic future. At ROBO Global, we continue to be ALL IN.