At a SXSW keynote address, Raffaello D’Andrea and his drones take center stage 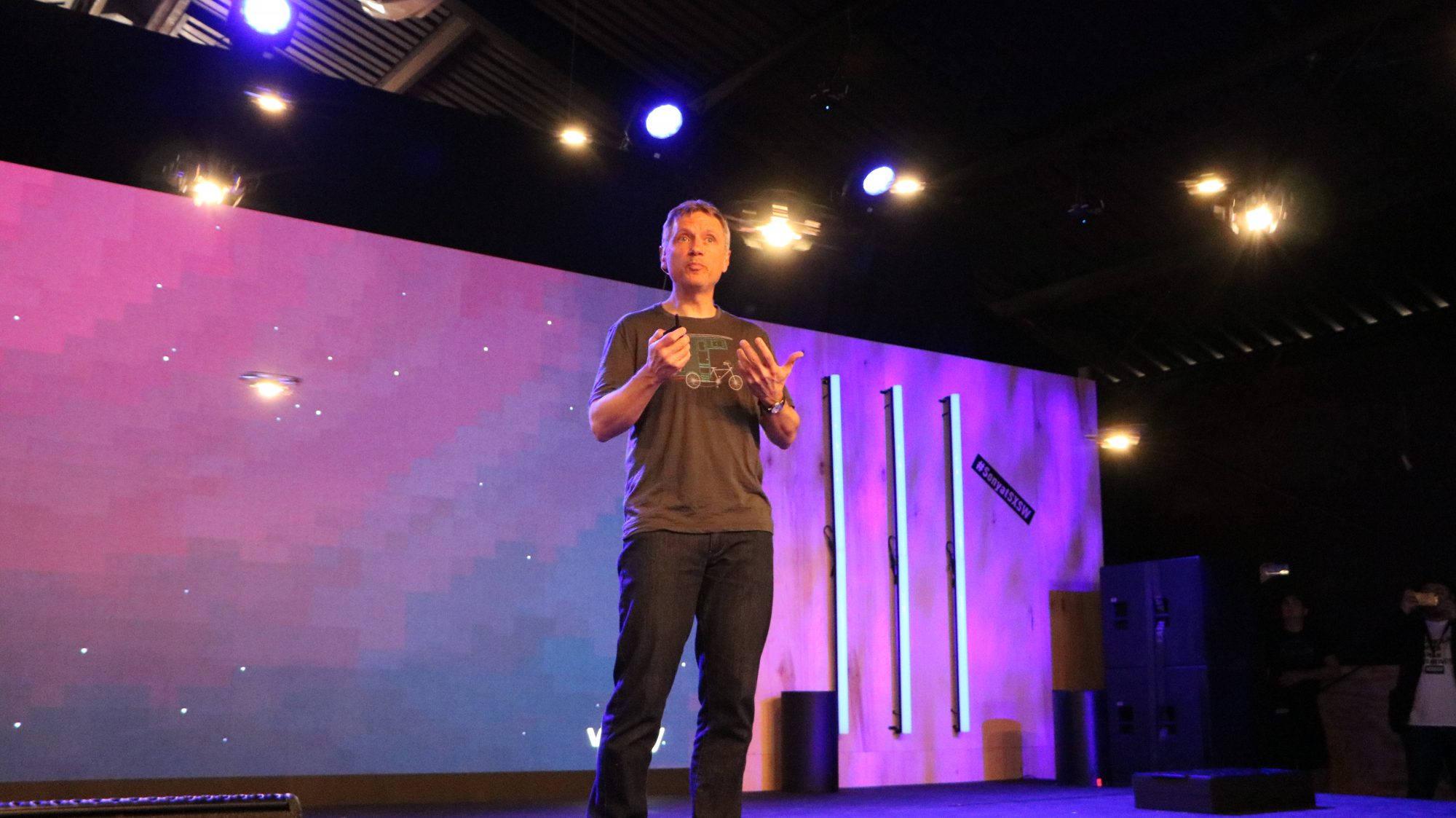 At a SXSW keynote address, Raffaello D’Andrea and his drones take center stage

At South by Southwest (SXSW) this year, ROBO Global co-founder and strategic advisor Raffaello D’Andrea took the spotlight at the Sony WOW Studio in Austin, TX. The focus of his keynote address: the future of drones.

D’Andrea’s goal is simple. As he told the audience, he strives “to push the boundaries of what autonomous systems can do—and, in particular, drones.” Soon after, a swirl of drones rose from the ground, enveloping the crowd in a perfectly choreographed demonstration of how these palm-sized autonomous systems use sensing and other technologies to deliver the ‘wow’ factor in today’s most innovative performances.

It’s an exciting era for D’Andrea and Verity Studios, the company he founded to take drone and localization technologies to the next level in live entertainment and beyond. And while Verity’s fleet of drones has logged over 120,000 flights with 2,000 shows to date—sharing the stage with some of the biggest names in entertainment—for D’Andrea, this is just the beginning.

D’Andrea may be best known for his co-founding role at Kiva Systems (now Amazon Robotics), the groundbreaking creator of the factory robots that became foundational in helping Amazon completely disrupt the retail industry. Following that success, D’Andrea and his partners founded Verity Studios just five years ago with the goal of pushing the boundaries of drone technology. Their mission, then and now, is to rethink existing drone technologies and create systems that are robust and reliable. “One of our key use cases is creating drones that serve as ‘guest performers’, using our proprietary algorithms to fly autonomously and safely at live events,” D’Andrea told the ROBO Global team late last year.

At SXSW, D’Andrea talked about the recent shift in the way the entertainment industry views the potential for drone technologies. Production designers are constantly seeking ways to capture the attention of an audience in new and exciting ways. Thanks to Verity’s innovations that enable drones to fly safely in and around people in enclosed environments, drones are now adding an exciting interactive element to help grab and hold the attention of audiences of every age. Verity’s fleet can be choreographed and ‘costumed’ to fit perfectly into the design of any production, and it has already helped top entertainers take entertainment to new heights—literally.

The next step—and a primary focus for the team at Verity today—is making the same intelligent safety algorithms that protected performers, audiences, and the drones themselves on Broadway available to all drone manufacturers. D’Andrea is adamant that additional safety regulations and measures are the crucial next step for expanding the use of drones in consumer and commercial contexts, especially when flying close to people.

Toward that end, Verity launched an integration program for Failsafe at the SXSW event. Failsafe is a flight control algorithm that enables drones to stabilize themselves autonomously in the case of a mid-flight propeller, motor, connector, or other propulsion system failure. When one or even two propulsion systems fail, instead of spinning out of control and crashing to the ground, the drone stays in the air, stabilizing itself using sophisticated algorithms. It can then be safely navigated to an appropriate landing location. This ability to function reliably using a partial autonomous system is unlike anything that’s been seen before. (View the SXSW demo flight here.)

D’Andrea’s presentation at SXSW did much more than highlight the latest in drone technology and showcase how Verity Studios is expanding the landscape for drones in entertainment and beyond. The innovations he demonstrated also serve as testament to the power of robotics and AI in many areas of our lives. Drone applications are pushing new boundaries using artificial intelligence, sensing, computing, machine learning, systems integration, and much more.

For investors, this news is a call to action. These same core technologies are already at work, transforming nearly every industry in every region across the globe. From building safer drones to enabling the smart cities of tomorrow, the providers of these core technologies are seeing unprecedented levels of demand and creating immense potential for growth. Drones and the technologies that put them in flight are taking off. It’s up to investors to support and profit from that trajectory.