If you cannot see the form above, you may have an ad blocker preventing it from loading.
Please disable the ad blocker and refresh the page.

ROBO Global uses this information to keep you up to date on the latest
investment insights and technology trends. You may unsubscribe from these
communications at any time. For more information, check out our Privacy Policy.
If you cannot see the form above, you may have an ad blocker preventing it from loading.
Please disable the ad blocker and refresh the page.

Who doesn’t remember that first time behind the wheel of a car? As a teenager growing up in Minnesota, for me, driving meant one thing: freedom. And that, for the first time ever, I could go wherever I wanted, whenever I wanted, on my own. And, oh man, it was easy. At 16, life was all about me and the open road.

Of course, that was more years ago than I like to admit. Today, my daughter isn’t nearly as enthusiastic about driving. Like most of her friends, she is more than happy to rely on Lyft to take her almost anywhere she wants to go. As a parent, I couldn’t be happier. In 2015, 2,333 teens in the United States ages 16–19 were killed and 235,845 were treated in emergency departments for injuries suffered in motor vehicle crashes.[1] That means that six teens between the ages of 16–19 died every day from injuries due to a car crash. And though teens represented only 7% of the U.S. population, they accounted for 11% ($10 billion) of the total costs of motor vehicle injuries in 2015. If I could wish for anything today, it’s that my daughter doesn’t become a number in those grim statistics. If only I could train her to be the world’s most experienced driver—instantly!

That’s precisely what the manufacturers of self-driving cars are striving for today. There’s no doubt in anyone’s mind that achieving that goal won’t happen overnight, but it’s a goal that’s well worth the wait… and the struggle. According to the National Highway Traffic Safety Administration (NHTSA), 37,461 people were killed in the US alone in 34,436 motor vehicle crashes, an average of 102 per day, in 2016.[2] Even more compelling is this fact: more than 94% of those thousands of crashes were due to driver error.[3]

These numbers are frightening for even the bravest of drivers. And sadly, if things don’t change, those statistics are unlikely to improve.

The light-blue line in the chart below shows the number of motor vehicle of deaths each year in the US since the 1920s. It’s no surprise that the number of deaths has increased with the population, the number of cars on the road, and miles driven. But while there’s been a fairly dramatic decrease in the number of deaths since the late 1960s (more on that in a minute), more recently, the number seems to be stuck between 30,000 and 40,000 deaths annually. It’s an unfortunate and stubborn statistic: 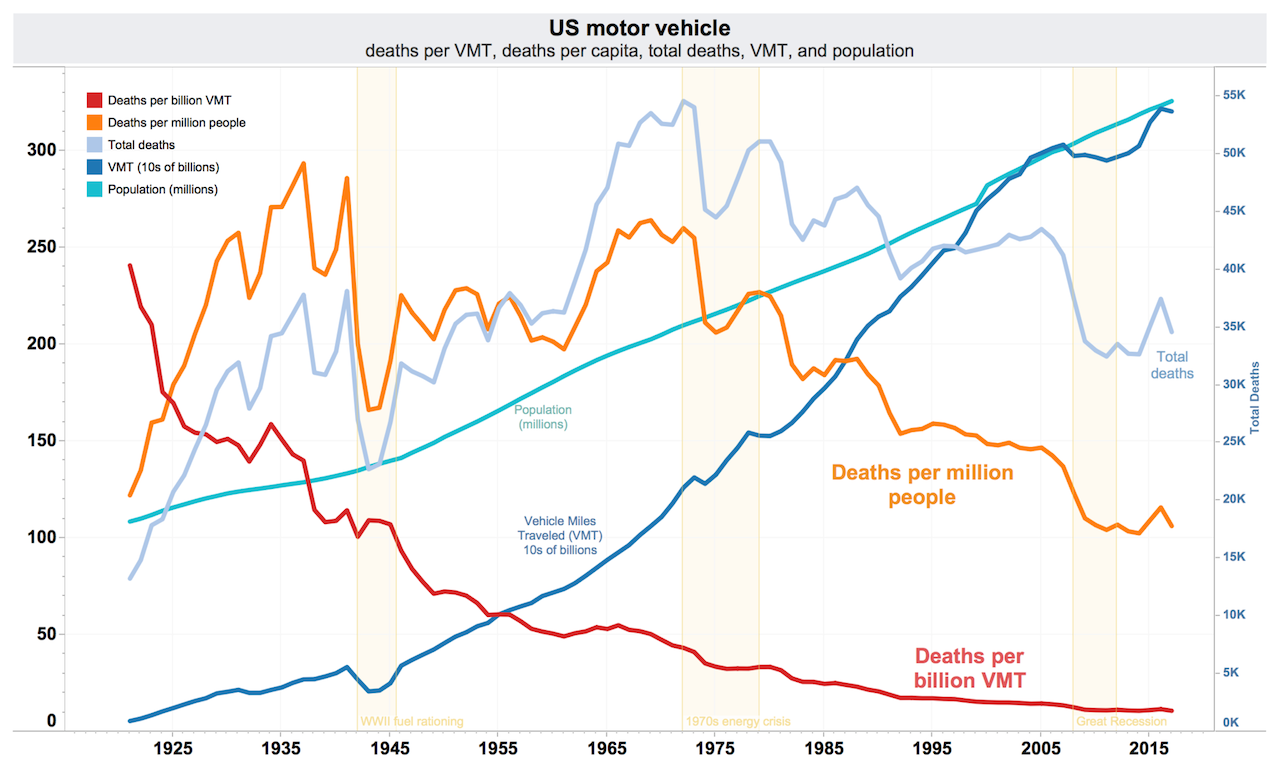 Changing these numbers requires one thing: innovation. That’s exactly what decreased the number of car-related deaths following the peak in 1972. First, in 1968, a Federal law was passed that required seatbelts to be installed in all vehicles. Then, in 1984, the first mandatory seatbelt law was enacted. The impact on safety was massive. According to the CDC, between 1975 and 2008 the use of seatbelts in the United States alone has saved an estimated 255,000 lives.

The challenge today is to deliver the next wave of innovation—and to take the number of car-related deaths from about 35,000 deaths per year to as close to zero as possible. Luckily, that innovation is already on its way.

Introducing the world’s most experienced drivers

Thanks to lightning-speed advances in the amount of data today’s microchips are able to translate into actionable information, self-driving cars are already delivering the world’s most experienced drivers—in the form of vehicles that are driven by the world’s smartest computers. High-speed microchips that can process enormous amounts of data are at the ready to support the high-tech sensors that power the cameras, radar, sonar, GPS, and light detection and ranging (LIDAR) required for partially and fully autonomous driving. Machine learning and pattern recognition are enabling the newest wave of automated cars to react based on the rules we apply, effectively “training” what will be the next generation’s most experienced drivers. And all of this is happening now.

At the current rate of development, highly automated vehicles that enable “hands-off, eyes-off” driving are expected to be on our streets before my daughter graduates from college. Which means my daughter will live in a world with far fewer car accidents and car-related deaths.

Then why is there such resistance and fear surrounding autonomous vehicles? Looking at the numbers, self-driving cars are performing far better than human drivers, causing dramatically fewer deaths per number of miles driven. Of the four deaths worldwide that have resulted from automated vehicles, one involved a pedestrian that was struck by a self-driving Uber. The other three were caused by Teslas, which, as of March 2018, had clocked 130 million miles. That’s a total of 4 deaths in 130 million+ miles—a mere fraction of the number of deaths caused by vehicles operated by human drivers, including not just teens, but I assume many very experienced drivers. Experienced drivers who made very human errors.

There’s no doubt about it: human error is today’s biggest killer on our roads. Despite our natural fear of trusting our lives to technology, there is overwhelming evidence that driverless cars are safer than cars driven by humans. And while the resistance to self-driving cars will surely continue for some time (just as it did for seatbelts) the automotive industry sees the writing on the wall and is continuing to pour billions of dollars into the development of self-driving vehicles. Their efforts will result will be one of the largest and most beneficial technology disruptions we’ve seen yet.

For investors, the opportunity is huge, covering a massive global supply chain of technologies and applications that will support this massive emerging industry. Computing, AI, and processing. Sensing and actuation. Logistics automation and manufacturing. Every one of these areas is poised to play a major role in this new evolution of human progress. Investors who understand that reality and take an active role will reap the rewards.

Of course, the biggest winners of all will be the generations to come—beginning with my daughter and her peers—that will see the number of car-related deaths plummet thanks to innovation, technology, and automation that truly delivers the world’s most experienced driver. I can’t wait.