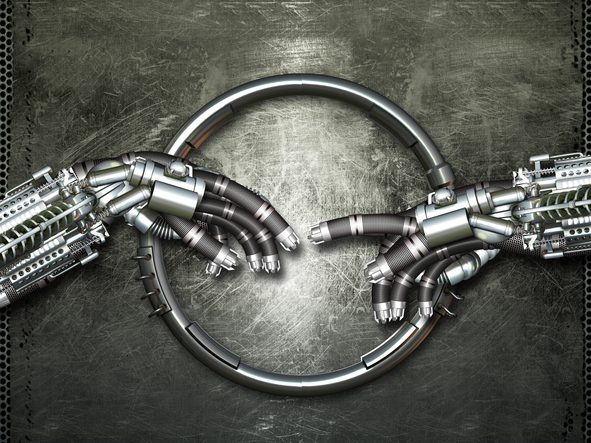 In 1956, Joseph Engelberger founded Unimation, Inc., the world’s first robotics company. It was a promising step toward a future enabled by robots. But over the decades that followed, advancements in robotics were consistently disappointing. Despite research efforts around the world, most robotics projects delivered only demonstrations and curiosities that died in the lab. The reasons were many.

First, new projects were nearly always started from scratch. New software was typically customized to work only with specific hardware, making it nearly impossible for engineers to re-use code and build on the prior work of their peers. Second, robot start-up companies faced a steep barrier to entry. Not only did they need to develop their own software, but they also had to fight for user acceptance of yet another robot programming language over and over again. This created a Tower of Babel curse. Languages and developments were being made all over the world, but because each language was incompatible with the others, no true progress could be made. Engineers and programmers kept reaching toward the future, but progress in robotics continued to flounder for decades.

The problem was clear, but despite the fact that experts in both industry and academia made significant efforts to bring standardization and compatibility to robot software, their attempts were thwarted by a lack of support, the prevalence of proprietary licenses, or both. Today, more than 60 years after that first robotics company began, the solution is at hand. Thanks to the industry-wide movement to create an open-source, reusable standard, Robot Operating System (ROS) is quickly becoming the de facto programming approach for modern robotics.

It all began at the Stanford Artificial Intelligence Lab in 2007 when researchers embarked once again on the mission to unify the many fragmented approaches to creating useable, and reusable, robot software. Using an approach that followed the modern trend of open-source software and distributed collaboration, the Stanford team delivered the first version of ROS in 2008. The system was supported by Willow Garage from 2008 to 2013, and became the standard for the Open Source Robotics Foundation (OSRF) in 2013.

While ROS may be similar to some earlier programming languages in its openness and accessibility to researchers, Google’s 10 years of ongoing support may be credited with ROS surviving a crucial incubation period. Unlike its predecessors, ROS finally bridged and leveraged a wide variety of parallel open-source efforts, including OpenCV, PointCloudLibrary, Open Dynamics Engine, Gazebo, and Eigen. ROS also features a very permissive license (BSD) that allows for reuse in commercial and closed-source products. The result: the ROS ecosystem now consists of tens of thousands of users worldwide, working in domains ranging from tabletop hobby projects to large industrial automation systems.[1]

Overcoming the Tower of Babel curse

As a robotics researcher and an educator, I have seen the power of ROS firsthand and witnessed how giving programmers the ability to reuse code has dramatically accelerated the pace of innovation. For my students, ROS has streamlined the process of building robots from start to finish. Highly sophisticated robotic “packages” can now be integrated like LEGO blocks, making it easier than ever to build on some of the best existing software from the world’s top robotics experts.

In 2013, DARPA selected ROS and its simulation environment, Gazebo, as the standard programming language for its Virtual Robotics Challenge, a university-level team competition from which six finalists are chosen to battle head-on to build the most innovative robots across a wide variety of mechanical designs. DARPA has continued to choose ROS and Gazebo every year since, including for its upcoming Subterranean Challenge. And DARPA isn’t alone in its decision to adopt ROS as the standard. The National Institute of Standards and Technology (NIST) is currently offering its second Agile Robotics for Industrial Automation competition using ROS and Gazebo. At these competitions and in commercial applications across the industry, ROS is being used to develop every sort of robot. Tomorrow’s legged robots, flying and crawling robots, and robots performing fulfillment-center type operations are all being developed using the power of ROS, and they’re being designed, built, and delivered faster than ever before.

ROS and the future of robotics

I have been teaching ROS at Case Western Reserve University since its earliest releases, and the value of this standardized language for the future of robotics has never been more evident. Using the ROS framework, it is now possible to turn programming neophytes into productive developers in a single semester. It’s a dramatic shift from the days when becoming a top-notch programmer took years of study. As these students enter the workforce, they are finding their ROS skills to be highly attractive to their future employers—robotics companies large and small who are working to create the next generation of robots at a fast and furious pace.

The robotics revolution is here, and I’m excited to be part of it. From my own observations, I am convinced that ROS is playing a key role in the current resurgence of robotics. The barrier to entry for robot start-ups has been lowered. Progress in building smarter, more capable robots has accelerated dramatically. Research efforts around the world are being integrated to build systems that are more sophisticated than any one individual or group could have achieved independently in a lifetime. The Tower of Babel curse has been lifted once and for all.

Prof. Wyatt Newman, Ph.D. has held visiting appointments at Sandia Labs, NASA, and Princeton, and international appointments at Philips (Eindhoven, The Netherlands), as a Distinguished Visiting Fellow at U. Edinburgh, and The Hung Hing Ying Distinguished Visiting Professor at U. of Hong Kong. He has led teams in two DARPA grand challenges—autonomous vehicles and disaster response robotics—and in two recent NIST competitions for agile robotics. His textbook, A Systematic Approach to Learning Robot Programming with ROS, was released by CRC Press in 2017.