READY TO INVEST IN ROBOTICS? YOUR TIMING COULDN'T BE BETTER 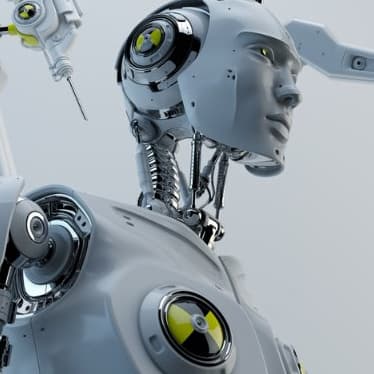 Shark Tank’s star investor Mark Cuban was spot on when he stated that, “the world’s first trillionaires are going to come from somebody who masters AI and all its derivatives and applies it in ways we never thought of.” His audience at Austin’s popular SXSW Conference back in March may have trusted his opinion, but only a handful likely understood why that statement is so true—and why that reality may make today the perfect time to invest in robotics.

Clearly, Cuban has seen the writing on the wall. The ingredients of a major and imminent breakthrough are already in place. When that breakthrough does happen, there will be an immediate and massive shift in how every industries and every market functions. What lies at the heart of that change is a dramatic evolution in robotics, automation, and artificial intelligence, or “RAAI.”

While many investors are aware of robotics and AI as a market sector, only those who are aware of how deeply these fundamental technologies extend into every area of our world understand the potential it presents from an investment perspective. That reach can’t be overstated. Just as computers and the Internet created a digital revolution that has transformed how we work, play, and even think, RAAI is bringing about a robotics revolution that promises to be even larger and drive even greater change. If you find that hard to fathom, just take a brief look at some of the drivers of this revolution and how RAAI is already driving major transformation.

Let’s start with e-commerce. E-commerce, or online retail, has far exceeded anything we could have imagined just 10 years ago. In 2007, e-commerce sales accounted for just 3.4% of total retail sales in the US. By the end of Q2 2017, that percentage had jumped to 8.9% percent of retail sales for a grand total of $111.5 billion in e-commerce sales. Today, the projected annual growth rate for e-commerce in the US is over 16%.

In China, those numbers are even more impressive; the country’s e-commerce sales are expected to hit 23.1% of all retail sales in 2017, and that figure is expected to increase to 40.8% by 2021. Of course, this enormous growth has forced manufacturers, distributors, and retailers to step up their game as well, resulting in major investments in robotics technologies.

Amazon, as always, is the biggest and best example. In 2012, Amazon purchased Kiva Systems for a whopping $775 million. That robotics investment helped Amazon earn its place as the current king of retail. As of a year ago, Kiva’s warehousing robots had already cut Amazon’s operating expenses by about 20%, reducing costs by an estimated $22 million for each of Amazon’s fulfillment centers and cutting cycle times from over an hour to 15 minutes or less. As deployment expands to Amazon’s remaining fulfillment centers, the company is expected to achieve close to $1 Billion in one-time cost savings. It’s an example that has quickly become the model across the industry. As Amazon’s competitors (which includes retailer, manufacturers, and distributors alike) strive to follow in their footsteps, demand across the robotics supply chain has skyrocketed.

The healthcare industry’s adoption of RAAI is no less impressive or expansive. Robotic surgery for laparoscopic procedures was first introduced in 1985 and was one of the earliest uses of collaborative robotics. The industry has continued to invest heavily in robotics ever since, relying heavily on surgical robots to enable minimally invasive and remote surgeries that improve patient outcomes, and using AI to transform how doctors deliver care to patients.

The next big wave of innovation in healthcare is expected to come from IBM, who has already invested billions in the development of its Watson supercomputer—a machine designed to meld human expertise with digital speed to give patients highly personalized treatment advice. And while some analysts have questioned IBM Watson’s ability to keep pace with other technology providers, just last month, IBM announced plans a new partnership with MIT, including a $240 Million investment in its MIT–IBM Watson AI Lab which is designed to further AI research and drive scientific breakthroughs that will impact health care and other industries, including cybersecurity. Any critique of IBM Watson’s speed-to-market only underscores the rapid pace of innovation that is taking place in every area of robotics development today.

Big data is another key driver of investments in RAAI, and for many companies, their success hinges on their ability to translate data into actionable metrics. Knowing that it has only 90 seconds to capture each customer interaction, Netflix uses AI-generated algorithms to deliver search results that are matched to each user’s viewing habits, saving the company billions of dollars in potential lost revenue. From Facebook to independent retailers, businesses of every size rely on big data to identify and target prospects and drive sales. Google relies on AI to translate the massive amounts of data it collects from the posts, comments, and search queries of its more than 1 Billion users. Just this week, Nvidia announced its new Pegasus platform that can deliver over 320 Trillion operations per second and is designed specifically to support the development of self-driving cars.

Everywhere you look, RAAI is the source of new growth. For those looking for a way to invest in robotics, the ROBO Global Robotics & Automation Index tracks and monitors the ever-evolving space. A year ago, Bill Gates called artificial intelligence the ‘holy grail’ of computing. This past May, he mirrored that sentiment when he urged college graduates who want to make a big impact on the world to consider a career in artificial intelligence. “We have only begun to tap into all the ways it will make people's lives more productive and creative.” Like Mark Cuban, Gates sees the writing on the wall. For investors who share his vision, the future looks quite bright indeed.