Raffaello D'Andrea: Delivering on the Power of Invention 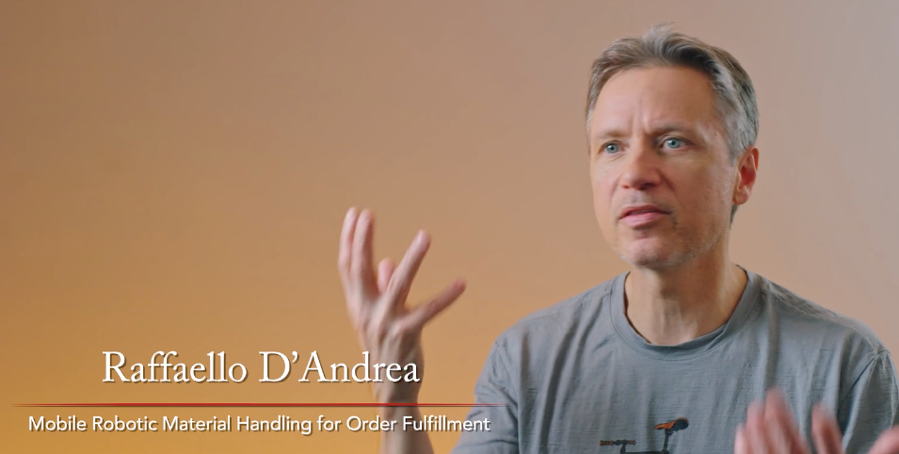 “To invent, you need a good imagination and a pile of junk.”
Thomas A. Edison

One thing is certain about Raffaello D'Andrea: He has a great imagination. And what he has accomplished with “a pile of junk” throughout the years is pretty incredible. He is best known as one of the founders and inventors behind Kiva Systems (now Amazon Robotics) and the mobile robots that have transformed the process of distribution and order fulfillment and turned the retail industry on its head. Raff’s work with Kiva co-founders Mick Mountz and Peter Wurman was the reason for the trio’s recent induction into the Inventors Hall of Fame (you can see the video about the 2020 inductees here). It doesn’t take much digging to see that Raff’s work at Kiva is just the tip of the iceberg for this consummate inventor. His breadth of work and years of experience in robotics and AI fuel his valuable insights into what investors should watch for as the future unfolds before our eyes.

As the founder of multiple companies, it would be easy to peg Raff as an entrepreneur like many others, and yet his true passion goes far beyond building businesses for their commercial promise alone. For Raff, the true excitement comes in the form of experiencing the world around him and then creating things that transform how we interact with our environment. That’s been the case ever since he was a child (a fact that makes it quite miraculous that he survived his early years at all!). By his own account, he studied water pressure by jumping into a swimming pool—with bricks attached to his legs and a garden hose in his mouth. He studied the laws of inductance by combining batteries, transformers, and his own mouth as a ‘poor-man’s voltmeter’—learning a painful lesson in the process. He created hydrogen gas by electrolysis—by flooding his basement with chlorine gas. And in a precursor to his later work in drone technologies, he studied aerodynamics by jumping from a rooftop using a lawn umbrella as a parachute—an experiment that proved umbrellas to be very poor stabilizers, despite the theory of a rather daring 12-year-old scientist.

Since then, Raff has evolved into a true definition of a modern renaissance man. He is part academic (he is a Professor of Dynamic Systems and Control at ETH Zurich), part scientist (his research has redefined the nature and use of autonomous systems), and part artist (his new media works have been exhibited at the Venice Biennale and are part of the permanent collections of the National Gallery of Canada and France’s FRAC Centre). On top of it all, of course, he is a businessman who co-founded Kiva Systems, co-founded ROBO Global, is an active member of the ROBO Global Strategic Advisory Board, and founded Verity, the Swiss-based company that creates some of the world’s most advanced autonomous flying machines.

Needless to say, he is excited about the future of drones, and not only as tools for entertainment. In fact, when he sees Verity’s drones flying over and around performers show after show, he sees an incubator for the future in action. “Testing this technology in real situations with real people has been a great incubator for any number of uses for drones,” he says. “Working with roadies for Drake and Céline Dion and working with the carpenters on Broadway who control the effects for Cirque de Soleil, we’ve learned how to combine a simple user interface with advanced automation to enable true autonomy in a wide variety of situations. The result: the Verity team doesn’t operate the system at all, and even the roadies and carpenters don’t do much more than push a start button. And with every new project, we’re improving what drones can do in other more practical roles.”

For example, Verity’s drone technology now allows an unlimited number of objects to localize themselves in space, safely and reliably. They can be used in indoor spaces for tasks such as data collection, inspection and monitoring, and to read barcodes to track and manage inventory on out-of-reach shelves in a warehouse. Extremely small and lightweight, they are fully autonomous, capable of charging, taking off, and accomplishing a variety of tasks 24/7—and all without the involvement of a human being.

The biggest challenge Raff sees at the moment—for his own flying machines and for all applications of robotics and AI—is improving two things: robustness and reliability. “Unleashing the potential of robotics and AI requires widespread and fearless adoption, and the bottleneck to that adoption is robust, reliable systems.” It’s a challenge he takes to heart, and one that he and his partners were able to solve at Kiva Systems. “Amazon now has over 200,000 robots working non-stop in its warehouses. We knew we had to deliver an extremely high level of reliability, and we were able to meet that challenge. It simply wouldn’t have worked if the robots were running into things or each other, if the things they were carrying at high speeds fell down, or if they broke down on the warehouse floors.”

Of course, that‘s even more true for drones that are flying through the air around humans, whether they are audience members watching a show or co-workers on the warehouse floor. That challenge was the catalyst for Verity’s new Failsafe technology, a patented solution for quadcopters that effectively guards against propulsion system failure—the most common cause of system-error crashes. Using Failsafe, instead of spinning out of control and crashing to the ground, the drones use sophisticated on-board algorithms to automatically stabilize during a failure and stay in the air. Quadcopters are now the most popular type of drone, which makes this type of software-only safety upgrade particularly attractive to companies like DJI, the leader in the space with more than 75% of this fast-growing market. Verity recently made the code commercially available, and Raff sees widespread adoption as the key to making drones much safer to fly over people and to expand the range of commercial drone applications.

The Sky Is the Limit

“The potential for commercial drones is incredible,” he says. Drones are already being used for photography, precision agriculture, pipeline inspection, and fire fighting. Firefighters in Paris used drones to monitor the tragic Notre-Dame Cathedral fire to find the best positions for their brigade of fire hoses and to collect real-time data that was essential for fighting the fire. Next up: package delivery, including ‘last mile’ package delivery for Amazon and other retailers, as well as delivering blood samples from one hospital site to another. “This is already a multi-billion dollar market, and the sky is literally the limit.”

When Raff talks about the future of robotics and AI, his perspective is rooted in every area of his work—as an academic, scientist, artist, and entrepreneur.

He points to his own experience with Kiva Systems as a prime example. While it’s difficult to imagine where Amazon would be without its now-famous factory robots, there was a moment in time when the future of Kiva Systems could have been quashed completely. In February 2008, five years after kicking off their fledgling company, Raff, Mick, and Pete had lunch to decide if they should do a fundraise. And though they didn’t really need to take any action (they were essentially cash-flow positive and had a large and growing pipeline at the time), they opted to move forward purely for added protection against the unknown. “It was a defining moment. When the financial crisis hit hard in October that year, we had just finished our fundraising. That money acted as a much-needed insurance policy, and we were able to ride it out. If our lunch conversation had gone differently, Kiva may not have survived the storm.”

The rest, of course, is history. When Amazon bought Kiva in 2012, it confirmed the new reality for companies around the world: the business potential of robotics was real, and the right time to invest in it was now. Raff believes that the same is true across the spectrum of robotics and AI today. “This is a very unique time in history when investors have an opportunity to invest at the earliest stages in an area that is going to completely change how we see the world. In the next decade, how we use robots and AI to our advantage is going to shock even the most forward-thinking people.” As this inventor sees it, we are in the midst of a vast incubator, and it’s only a matter of time before the testing and fine-tuning is complete. “When that happens, change will accelerate exponentially, and investors that are positioned in the right place at the right time will reap the rewards.”

For investors, the power of invention is something we can all believe in—no jumping from the rooftops required.