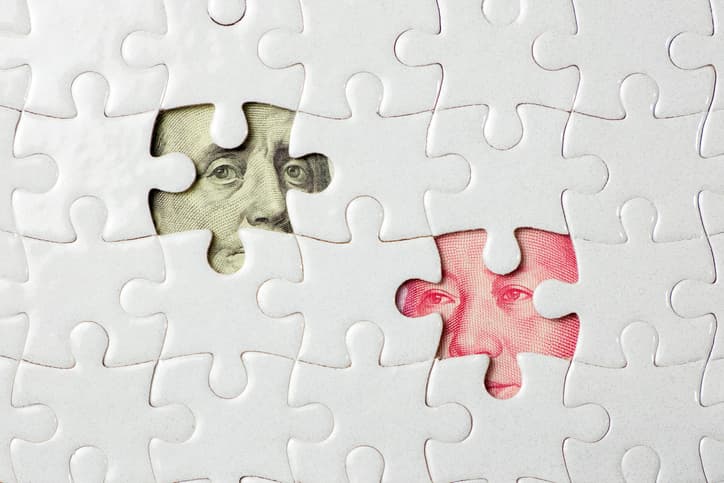 The markets are jittering again as US-China trade negotiations enter the final stretch. Just days ahead of a scheduled visit of China’s trade team to Washington, President Trump renewed his threat to ramp up tariffs on $200B of Chinese imports from 10% to 25%. The news hit stocks hard on Monday and Tuesday—especially robotics and automation companies. At ROBO Global, we believe that such a pullback presents investors with a rare opportunity to increase exposure to robotics, automation and AI companies at discounted prices.

We believe that a resolution to the trade war is likely before the G-20 summit in Osaka at the end of June. According to ROBO Global Strategic Advisor and Gavekal Research CEO Louis-Vincent Gave and his team, both sides face significant political pressure to secure a deal. President Trump needs to shore up his 2020 chances, while Xi Jinping looks to give his recently revived economy a much-needed boost and to tame critics. Both sides also stand to lose significantly in the case of a breakdown, which would undoubtedly send the markets in a downspin. According to Gavekal, the US and China have already agreed to support significant market-access openings in a variety of sectors and to introduce credibly tougher enforcement of intellectual property rights and protections for foreign investors—both of which are likely to create a boon for foreign suppliers of advanced technology in the largest industrial robotics market on earth.

It has also become increasingly clear that Chinese demand for automation has bottomed out after a year-long down cycle compounded by uncertainty around trade and declining automotive sales. After a phenomenal 2017, during which several areas of the robotics supply chain were not able to meet dramatic surges in demand, the Chinese market suffered a hangover that sent factory automation stocks down hard. Two sectors, manufacturing & industrial automation and actuation, were the largest detractors of the ROBO Global Index in 2018, with both sectors down more than a third. However, factory automation stocks came roaring back with vengeance in 1Q19 as soon as lead indicators hit prior cycle lows. (See the ROBO Global First Quarter in Review for more detail.)

The earnings season has brought its fair share of good news so far, despite most factory automation companies reporting profit declines in 1Q19. This is because order rates in China began to improve in March, with the upward climb continuing in April following improvements in credit growth early in the year and a raft of better-than-expected macro numbers in 1Q. For example, Fanuc, the world’s top industrial robotics supplier, hit a turning point as orders grew sequentially for the first time in five quarters. Fanuc stock is up 23% Year To Date (YTD) in US$ terms. Japanese robotics and factory automation company Yaskawa also commented that China orders were on a recovery trend, delivering a 50% rise in its stock price YTD. Other Japanese exporters of factory automation equipment such as Harmonic Drive (speed reducers), OMRON (controls and sensors), Nachi-Fujikoshi (automotive robots), Yushin (linear robots), Nabtesco (speed reducers), THK (linear motion), SMC (pneumatics motion) and Daifuku (material handling) are all up anywhere from 33% to 47% YTD. Last week, IPG Photonics (+42% YTD), the global leader in high-power lasers, reported sequential growth in China orders and good momentum in April, after Han’s Laser (+20% YTD), China’s leading laser machinery provider, reported a clear acceleration in orders and upgraded its full-year sales outlook. CLSA Japan Head of Research and ROBO Global Strategic Advisor Morten Paulsen’s prediction that 2019 would bring the best buying opportunity in automation since 2015 was spot on. (See Spotlight on Asia: A Conversation with Morten Paulsen for Paulsen’s insights into recent developments in robotics, automation, and AI in Asia following the inclusion of China A-shares in the ROBO Global Robotics & Automation Index in March 2019.)

Many analysts have remained highly skeptical when it comes to the start of a new industrial up-cycle, primarily due to weakening economic growth elsewhere, especially in Europe. However, as discussed on many earnings calls in recent weeks, Europe is also showing signs of stabilization. This is also reflected in the pleasant surprises brought by the latest macro data, including better-than-expected GDP growth, Italy coming out of its recession, German manufacturing PMI turning up after nine months of declines, and the acceleration of real money supply. With China effectively bottoming, Europe poised to dodge a recession, and analysts remaining relatively downbeat, we see room for continued improvements in both fundamentals and sentiment throughout the remainder of the year.

The ROBO Global Robotics & Automation Index offers the exposure investors need to take full advantage of this opportunity. In addition to factory automation, which accounts for approximately 1/3 of weighted revenue for its members, the ROBO Global Robotics & Automation Index is comprised of the many other applications that encompass the robotics and AI revolution, including healthcare (9% of the index), logistics (11%), food & agriculture (6%), energy & security (4%), 3D printing (3%), as well as the fundamental technologies that make automated systems possible, such as computing & AI (20%) and sensing (11%). The Index has delivered total returns of 26.5% in the first four months of 2019, and an annualized 18.5% over the three-year period. For investors seeking to increase exposure and maximize opportunity, the ROBO Global Robotics & Automation Index provides global, diversified exposure to best-in-class companies across the entire value chain.