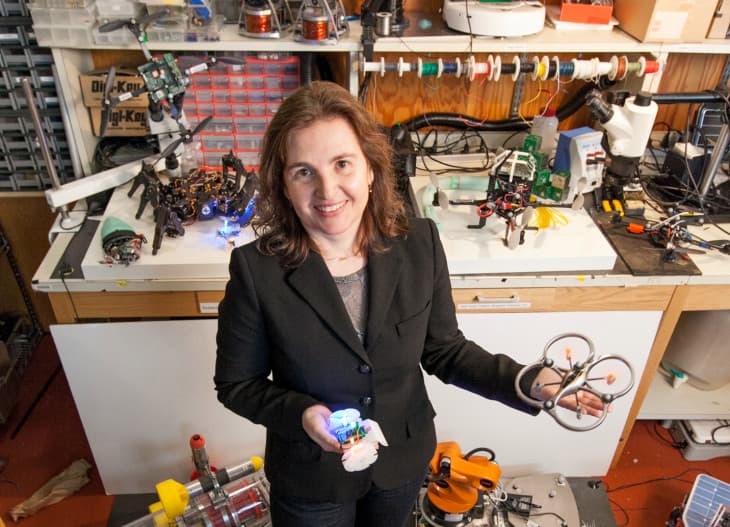 Daniela Rus is in the news—a lot. In September, she was named the winner of the MassTLC Innovation Catalyst Award, an honor bestowed on individuals who are making an “exceptional impact on the Massachusetts technology ecosystem.” (She will be recognized at a celebration at Fenway Park on November 6.) Last week, she was selected to serve on the Board of Trustees of the Mohamed bin Zayed University of Artificial Intelligence (MBZUAI)—the first graduate-level, research-based AI university in the world, based in Abu Dhabi. Other esteemed board members include the top AI experts from around the world.

Impressive? Definitely. But the accolades don’t stop there. In the past 18 months alone, Daniela has also been honored with the Constellation Research Award, named to the Business Transformation 150, received the Pioneer in Robotics and Automation Award from the IEEE Robotics and Automation Society for her “pioneering work in the science and design of distributed and self-configuring robotic systems,” and received the Woman in STEM Award from Wheaton College. Clearly, being in the spotlight is something Daniela Rus is accustomed to—and for good reason. As one of today’s most accomplished AI researchers, she and her team at MIT have earned a global reputation for changing the world as we know it through robotics and AI.

If that sounds like an exaggeration worthy of a JK Rowling novel, consider this: every day at MIT’s Computer Science and Artificial Intelligence Laboratory (CSAIL), Daniela and her team are discovering new ways to apply the power of robotics, artificial intelligence, neural networking, and machine vision to work to solve everyday challenges. Here’s just a peek at some of their latest accomplishments:

RELATED: Seeking the Holy Grail: The quest for a safe, reliable, and universally accepted self-driving car by Daniela Rus

As a member of the ROBO Global Strategic Advisory Board, Daniela Rus brings global insights and a deep understanding of the disruptive technologies and innovative AI- and robotics-enabled solutions that hold the greatest potential to change the world. A researcher with a seemingly endless list of passions, Daniela, along with her team of dedicated researchers, is continuing to work tirelessly to apply the power of robotics and AI to help solve some of the world’s most challenging problems.

For Daniela, the overall goal is equally ambitious. “The objective of everything we do is to continue to expand the science and engineering of autonomy and intelligence,” she says. “Using new materials, robot designs, and the planning, reasoning, and learning algorithms that we’re developing in a variety of applications, we are rapidly advancing the bodies and the brains of machines. This new workforce is supporting and accelerating the cognitive and physical tasks of humans and, ultimately, changing how we tackle old and new challenges in nearly every field of science.”

Daniela Rus is the Andrew and Erna Viterbi Professor of Electrical Engineering and Computer Science; Director of the Computer Science and Artificial Intelligence Laboratory (CSAIL); and Deputy Dean of Research for Schwarzmann College of Computing at MIT. She serves as the Associate Director of MIT’s Quest for Intelligence Core, and as Director of the Toyota-CSAIL Joint Research Center, whose focus is the advancement of AI research and its applications to intelligent vehicles. She is a member of the Toyota Research Institute advisory board, a Class of 2002 MacArthur Fellow, a fellow of ACM, AAAI and IEEE, and a member of the National Academy of Engineering and the American Academy of Arts and Sciences. She earned her PhD in Computer Science from Cornell University. To learn more about Daniela’s research and how she is changing the world, visit danielarus.csail.mit.edu.