Drones are taking flight indoors. Are you ready? 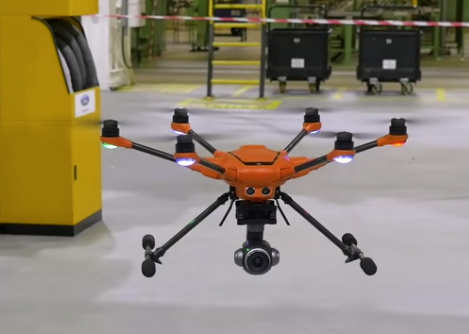 Every day, the unique abilities of drones are being applied in amazing new ways:

If it seems like drones are popping up everywhere, that’s because they are. Except, quite notably, indoors. While the capabilities of drones are coveted for a wide variety of industrial applications, they simply haven’t been sophisticated enough to be 100% reliable and safe within enclosed spaces. But thanks to advancements in the underlying technologies that enable drones to fly autonomously and safely, drones may soon be breaking down the doors. Here are just three examples:

A drone’s ability to act as a flying sensor is one of the most obvious ways drones can add value indoors. Supply chain efficiency has long been a key driver of competitive advantage among manufacturers and retailers, and indoor drones could help accelerate supply chains in every industry. PINC in Northern California now offers PINC AIR, Aerial Inventory Robots™ that combine drone technology with advanced optical, RFID, and barcode sensor capabilities to improve the operational effectiveness and efficiency of warehouse inventory management. And Dallas-based Pensa Systems is marketing autonomous drones that navigate warehouses independently to give retailers continuous, real-time visibility of what is on the shelf to more accurately predict and optimize inventory.

Indoor drones are also a perfect fit for tasks that require monitoring and inspection. At Ford’s Dagenham Engine Plant on the outskirts of London, workers previously had to scale heights of more than 150 feet to check the plant’s roof. Today, drones fitted with GoPro cameras do the work instead, completing detailed inspections in minutes. And while roofs are inspected outside, drones are also being used inside the plant to reach and inspect equipment located far above the factory floor, saving a day’s worth of man hours and keeping Ford’s human workforce safely on the ground. The same approach could be immensely valuable at refineries, where human inspectors face extreme risk and the use of stationary cameras is limited due to cost and their inability to ‘see through’ steam and smoke like drones can.

Anyone who has been annoyed by a buzzing drone over their previously private backyard is all too aware of drones’ ability to ‘see’ using onboard cameras. But imagine how useful this capability can be in the world of security. Unlike stationary cameras, drones offer a level constant, maneuverable surveillance that cannot be achieved otherwise. Skysense and Avansig recently announced a joint venture to build indoor drones designed to detect potential security threats or breaches. The companies plan to build in-flight security guards that follow a pre-programmed route, broadcast a live stream, and flag any suspicious activity. The fully autonomous fleet will return to their charging pads when needed and require little input from humans. The expected result is a dramatic increase in the effectiveness of 24/7 security and a significant decrease in security-related costs.

The use cases for indoor drones seem almost limitless, and for every case there are start-ups feverishly developing prototypes. But widespread adoption is still a year or two away. The reason: drones simply aren’t advanced enough—yet—to be safe and reliable in certain settings. Drones could be very useful in the retail environment, but not until they are sophisticated enough to avoid obstacles (especially people) with a high degree of reliability. Drones have the potential to dramatically increase efficiencies both on and off the factory floor, but not until they can achieve a level of autonomy that eliminates the need for human intervention.

Cost is another barrier. Powering a drone requires batteries that, at least to date, are expensive and have a relatively short life. Drone batteries typically run for 50-200 cycles of about 20 minutes each. For a surveillance drone, that means each battery would only support around three days of flight time. It’s a costly proposition. Using drones to move objects—on a factory floor or elsewhere—is costlier yet, requiring a very high value-to-weight ratio to justify the hefty price tag. I’ve yet to see widespread, compelling cases in which a drone can cost-effectively replace a mobile robot. While using drones to move things outdoors has clear advantages, widespread adoption of drones indoors is dependent on the technology being cheaper and faster than rolling something from point A to point B.

I founded Verity Studios four years ago to push the boundaries of drone technology. One of our use cases is entertainment and events, where our proprietary algorithms enable the drones to fly autonomously and safely at live events. Our work for Drake made headlines last week for the innovative use of 88 micro drones that acted as high-tech back-up dancers during his Madison Square Garden concert. But that’s just the beginning.

Prior to Verity Studios, I co-founded a company which was later sold to Amazon and rebranded as Amazon Robotics. When Mick Mountz first came up with the idea of using mobile robots to manage inventory, he needed a way to bring that concept to life. Once he laid out the business challenge, Peter Wurman and I were able to solve the problem using a completely new application of robotics technologies, and Kiva Systems was born. It was an important ‘aha’ moment that has helped Amazon completely transform its distribution processes and dramatically accelerate the movement of goods across the supply chain. I have no doubt that drones will deliver equally transformative surprises.

I’ve learned from experience that it’s nearly impossible to predict how and where new technologies will be applied in the future. The challenge with technology, always, is that it requires a path to reach its potential. Those among the first to perceive that path often drive the trajectory and, ultimately, reap the financial rewards. For investors, the most important thing to keep in mind is that the commercialization of drone technology is still in its early stages. Yes, it is developing rapidly, but the landscape and the players are likely to evolve as quickly as the drones themselves.

Your best bet: invest in the core technologies that support the drone revolution. Sensing. Computing. Processing & AI. Integration. Companies that deliver on the promise of drones—in whatever capacity—will put every one of these technologies in high demand. Drones are taking flight. It’s up to investors to support and profit from that trajectory.

A member of the ROBO Global Strategic Advisory Board, Raffaello D’Andrea, PhD, is Professor of Dynamic Systems and Control at ETH Zurich, and founder of Verity Studios, a company developing a new breed of interactive and autonomous flying machines. He also co-founded Kiva Systems (now operating as Amazon Robotics), the robotics company that revolutionized material handling by deploying thousands of autonomous mobile robots in warehouses.

Raffaello served as the faculty advisor and system architect of the Cornell Robot Soccer Team, four-time world champions at the international RoboCup competition. He is also a new media artist with exhibitions at various international venues, including the Venice Biennale, Ars Electronica, and the FRAC Centre. Recent awards include the IEEE Robotics and Automation Award and the Engelberger Robotics Award, two of the highest achievements in the field. 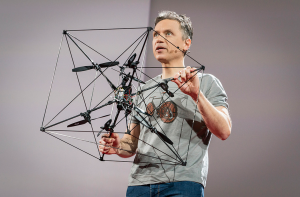