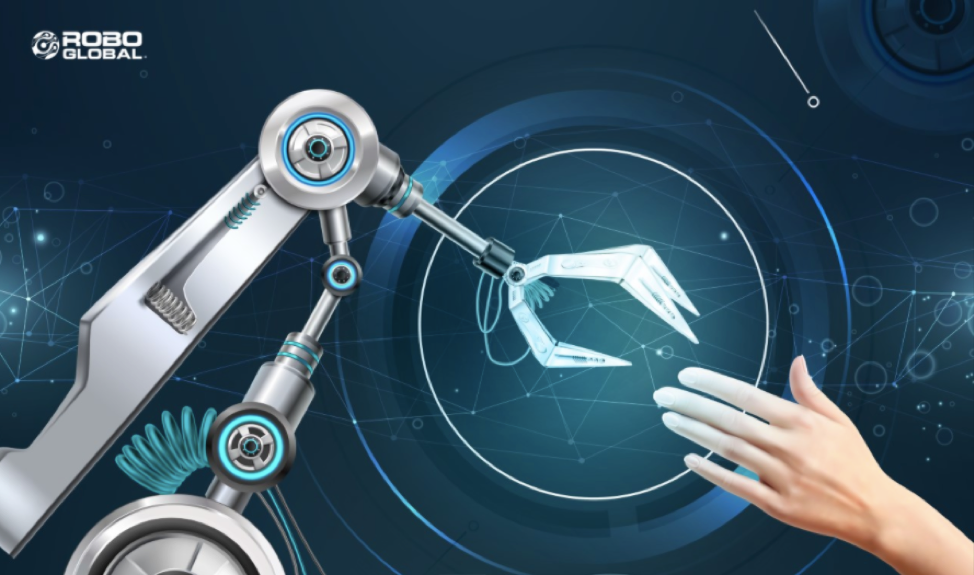 Smart warehouses. Ever since the earliest days of automation and Henry Ford, creating greater efficiency across the supply chain has been a driving goal for manufacturers and distributers of every kind. The reason is clear: greater efficiency leads to greater profitability. Yet, despite recent advancements in robotics technologies and applications, warehouse processes have remained on the cusp of transformative progress, not yet realizing the full potential of robotics-driven automation. That reality is changing rapidly. Today, robots are making a new kind of magic by working collaboratively with human workers to bring the truly smart warehouse to life.

When conjuring up images of tomorrow’s futuristic smart warehouse, it’s common to imagine a lights-out warehouse—a dark and eerie space where robots work in mechanical silence without the need for any human assistance at all. That fantasy is far from reality. As robotics, AI, and automation have evolved, so has the model for the smart warehouse of the future. Rather than striving for a fully mechanical workforce, today’s vision revolves around humans and robots working together in true collaboration, with robots taking on the dangerous, dull, dirty, and difficult jobs, and humans gaining the freedom to excel at tasks that require the creativity, critical thinking, communication, caring, and changeability we do best. The result is a warehouse environment that leverages the full power of robotics, AI, and automation, while utilizing the best of our human ability to act on insights and improve processes.

The current state of ‘smart’

Smart warehouses, of course, are not entirely new. Much of Amazon’s success has been attributed to its innovative use of robots in its warehouses. It wasn’t long before other leading retailers, including Walmart, Ocado (the UK leader in online grocery), and Kroger, followed in Amazon’s footsteps. As a cofounder and chief architect of Kiva Systems (now Amazon Robotics), I am intimately familiar with how Amazon introduced game-changing robotic-automation into the warehouse. When we were first developing the Kiva robots, we had a simple hypothesis:

“What if the item we needed to pack magically appeared in our hands?”

With that as our goal, we designed a system that leveraged both the dexterity and flexibility of human employees to pick and pack orders, and the mobility of autonomous ground robots (AGRs). Our solution was what we called ‘magic shelves.’ In an environment where human warehouse workers typically spend hours of every day walking between warehouse shelves to pick orders, our orange Kiva robots saved them the trip, literally picking up the shelf containing the item to be picked and delivering it directly to the employee. These ‘magic shelves’ ultimately succeeded in tripling employee productivity.

Innovative? Absolutely. But that was just the first step. Since our Kiva robots kicked off a global shift toward human-robot collaboration over a decade ago, many more great innovations have been developed, including articulated robotic arms (ARAs) that automate functions like receiving and storage, picking and packing, and shipping. Around 70-80% of labor in a warehouse environment is devoted to picking and packing, and ARAs are increasingly capable of performing this activity using a variety of new technologies. Dexterous, finger-like appendages that can pick small, non-uniform items. Suction cups that can handle small boxes and other more consistently shaped items. Appendages that look like shovels and claws that can pick up pallets and other large goods. There are even ARAs in development that are able to pick up and manipulate objects as deftly as a human hand. Every day, robotic technologies and applications like these are expanding, opening the door for even greater efficiency and productivity in the warehouse.

Smart though they may be, autonomous ground robots and articulated robotic arms are limited by one major constraint: gravity. Unmanned aerial systems (UAS) are an innovation that effectively take gravity out of the equation, increasing efficiency and productivity, while making warehouses safer for human workers.

Put simply, warehouses are dangerous for people. Many things can go wrong in the course of a standard shift. Employees can slip, trip, or fall from heights. Accidents can occur while workers are operating or working around equipment like scissor lifts and forklifts. Pallets can fall and, in severe cases, racking can collapse. These accidents often result in serious injuries that generate significant costs and revenue loss. (The average work-related injury results in $38,000 in direct expenses and $150,000 in indirect costs.) Even with a trained workforce, there are inherent risks associated with working at hazardous heights. Of the around 117,000 injuries and fatalities reported to OSHA (the United States Occupational Safety and Health Administration) between 2002-2018, 30% were described as a fall. Of those falls, 42% resulted in a fatality. The trend towards urban warehousing makes the need for a solution more urgent than ever. Since the 1970s, the average height of warehouse ceilings has risen from 20 feet to as high as 45 feet today. Smaller footprints and higher ceilings and racking further increase the potential for machine-related accidents and falls from even higher heights.

Unmanned aerial systems–-or drones—help improve safety by reducing the need for employees to work at heights and operate material handling equipment on lifting equipment. Autonomous indoor drones are also able to perform health and safety inspections, such as racking and fire hazard inspections, more frequently than human workers. With the help of UAS, employees are able to spend less time at dangerous heights performing required tasks, and safety risks can be identified before they result in injury or death. It’s the perfect example of human-robot collaboration—and a win-win for productivity and safety.

Like with all automation offerings, for the full benefits to be realized, UAS must achieve the highest level of autonomy and reliability. Most of the systems that are in use today are remote-controlled or partially autonomous, requiring human workers to pilot each drone, transfer them to new aisles, or place them back on their chargers. Other systems rely on a ground-based autonomous vehicle to guide drones around the warehouse, limiting the drone’s ability to avoid obstacles. At my current company, Verity, we’ve developed fully autonomous drones that can perform their tasks completely independently—no remote controls or human pilots required. When triggered by integrated Warehouse Management Software (WMS), these drones can take flight, perform a given task (such as scanning all the pallet locations that have changed in the past week), navigate between aisles, detect obstacles and re-route to avoid them, and even hand over any unfinished tasks to a new drone when they run low on battery. Once the drone has finished its task or needs to re-charge, it navigates back to its charging station and uploads the information it collected to the Verity command station—all before analyzing the data and providing an actionable report back to the WMS.

Unmanned aerial systems are continuing to evolve to make warehouses smarter and safer. Operating day and night, even if the facility is closed, they can monitor activity in the warehouse at all times, perform critical safety checks more frequently to keep workers out of harm’s way, and eliminate the need for human workers to take on some of the most dangerous tasks in the warehouse. It’s magic in the making.

Delivering the magic of human-robot collaboration

The potential for the future of the smart warehouse is vast—especially when technology enables humans and robots to each leverage their unique and fundamental strengths. By putting robots to work on the tasks that are intrinsically dangerous, dull, distant, difficult, human workers are free to accomplish tasks that involve dexterity, creativity, and ambiguous decision-making, making their jobs safer, less monotonous, and more fulfilling. The key to success in human-robot collaboration is to begin by defining clear processes and identifying what tasks can and should be automated. The next step is to enlist humans and robots to do the things they do best.

While many companies are already working toward this ideal model, there is a still a long way to go to achieve optimal human-robot collaboration. In today’s warehouses and fulfillment centers, human employees are still executing many dull and dangerous tasks that are better suited to robots. In many cases, inventory management is still performed manually by humans using a barcode scanner (or even pen and paper) and a scissor lift—at heights of up to 40 feet. Injuries due to accidents, fatigue, and repetitive stress are common, and employee retention is a challenge when daily tasks are dull and unfulfilling.

The COVID pandemic has highlighted the importance of automation for businesses, helping to ensure continued operations in the face of a global pandemic. In a world of next-day delivery, supply chains are already under pressure. The COVID pandemic increased this pressure further with the added complications of worker shortages, increased controls, and a surge in online purchasing. However, no pandemic is necessary to recognize the value of robots in our modern world. Even in the absence of a healthcare crisis, robots can make human work easier. Automation can reduce the amount of walking required by employees to pick and pack goods. Robots can accomplish the dangerous and dull tasks in a warehouse environment to give employees more time to focus on higher-value, more interesting, and safer jobs. Human-robot collaboration is indeed the ‘magic’ behind the smart warehouse of the future—and the future is here.

For a more detailed analysis and commentary on the future of smart warehousing, watch for Raffaello D'Andrea's chapter, "Human-Robot Collaboration: The Future of Smart Warehousing," in the upcoming book “Disrupting Logistics. Startups, Technologies, and Investors Building Future Supply Chains” by Luca Graf and Christian Wurst. (Springer, 2020)

Raffaello D'Andrea is the founder and CEO of Verity, the world leader in autonomous indoor drones, and a professor at ETH Zurich. He co-founded industrial automation company Kiva Systems, which was acquired by Amazon in 2012 and later rebranded as Amazon Robotics.

In 2014, D’Andrea founded Verity. Verity's systems enable clients across various industries, such as logistics, retail, and live entertainment, to use the power of autonomous drones. The company has deployed autonomous drone systems in more than 100 facilities in 20 countries worldwide. Verity’s drones have completed more than 200,000 flights, and the company set the Guinness World Record for the largest number of drones to fly simultaneously indoors.

In 2016, D’Andrea received the Engelberger Robotics Award and the IEEE Robotics and Automation Award. He was also inducted into the National Inventors Hall of Fame and was elected to the U.S. National Academy of Engineering (NAE) in 2020. D’Andrea’s work has made an impact on robotics research and education, the arts, and the millions of viewers who have watched his TED talks and lectures. He is a co-founder of ROBO Global and an active member of the ROBO Global Strategic Advisory Board.