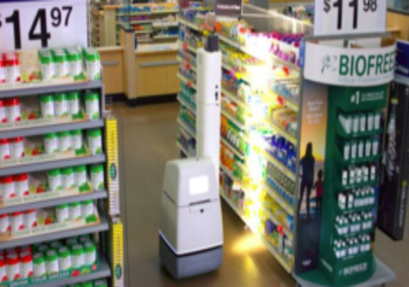 Bossa Nova Robotics, a Silicon Valley developer of autonomous service robots for the retail industry, announced the close of a $17.5 million Series B funding round led by Paxion Capital Partners and participation by Intel Capital, WRV Capital, Lucas Venture Group (LVG), and Cota Capital. This round brings Bossa Nova’s total funding to date to $41.7 million.

Bossa Nova helps large scale stores automate the collection and analysis of on-shelf inventory data by driving their sensor-laden mobile robots autonomously through aisles, navigating safely among customers and store associates. The robots capture images of store shelves and use AI to analyze the data and calculate the status of each product including location, price, and out-of-stocks which is then aggregated and delivered to management in the form of a restock action plan.

They recently began testing their robots and analytic services in 50 Walmart stores across the US. They first deployed their autonomous robots in retail stores in 2013 and have since registered more than 710 miles and 2,350 hours of autonomous inventory scanning, capturing more than 80 million product images.

“We have worked closely with Bossa Nova to help ensure this technology, which is designed to capture and share in-store data with our associates in near real-time, works in our unique store environment,” said John Crecelius, vice president of central operations at Walmart. “This is meant to be a tool that helps our associates quickly identify where they can make the biggest difference for our customers.”

CMU grads launched Bossa Nova Robotics in Pittsburgh as a designer of robotic toys. In 2009 they launched two new products: Penbo, a fuzzy penguin-like robot that sang, danced, cuddled and communicated with her baby in their own Penbo language; and Prime-8, a gorilla-like loud fast-moving robot for boys. In 2011 and 2012 they changed direction: they sold off the toy business and focused on developing a mobile robot based on CMU’s ballbot technology. Later they converted to normal casters and mobility methods and spent their energies on developing camera, vision and AI analytics software to produce their latest round of shelf-scanning mobile robots.