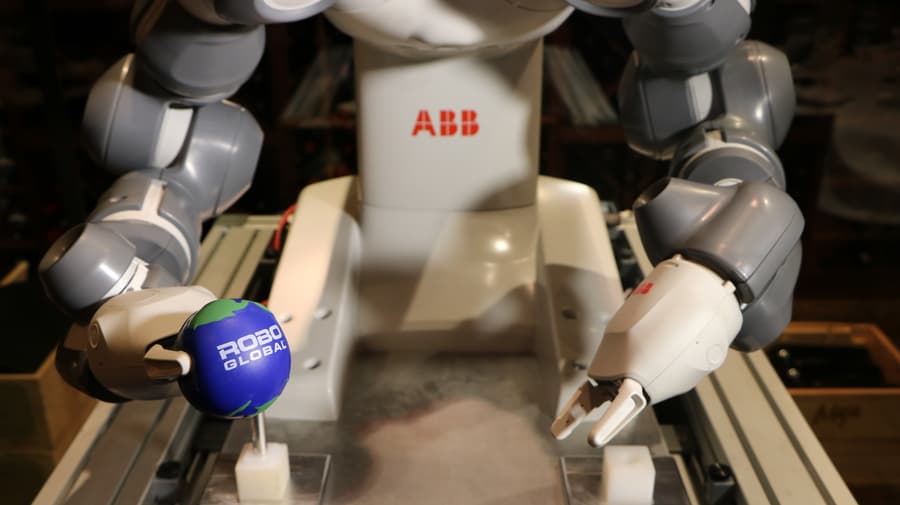 We returned from ABB’s inaugural Innovation and Technology Day with increased confidence in the company’s prospects for continued profitable growth in its robotics and automation businesses. ABB has been a member of the ROBO Global Robotics & Automation Index since inception.

CEO Ulrich Spiesshofer and his team hosted shareholders and analysts at the Auburn Hills, Michigan manufacturing facility. We had the opportunity to catch up with many of the firm’s senior technology and robotics leaders. The plant delivered its first industrial robot earlier this year, reflecting ABB’s emphasis on building locally, in contrast to its main competitor. While Fanuc makes pretty much everything in Japan, ABB also makes robots in Sweden and China.

The tone was particularly bullish. First, the markets for industrial robotics and factory automation are booming. Manufacturers around the world are striving to keep up with recovering order books and scrambling to automate. As discussed in our recent report “Summer Brings best ROBO Earnings in Six Years”, demand is particularly strong in China, where ABB is the market leader. In fact, capacity constraints are starting to emerge in various areas of the supply chain for the first time since 2007.

ABB’s move to expand capacity in the US appears timely. The automotive industry, which remains the single largest end-market for robotics, is going through the biggest investment cycle in its history as it scrambles to electrify. Meanwhile, penetration looks set to increase in general industries such as food & beverage, electronics and logistics. In addition, the recent acquisition of Austria-based Bernecker & Rainer has filled the most obvious gap in ABB’s automation portfolio with a strong controls and servomotor offering. At an estimated $2bn or 21x EBITDA, the deal certainly does not strike us as cheap but between China where B&R is underrepresented and currently modest margins, we see significant profit growth potential.

Beyond robotics and factory automation, 2017 is likely to mark a turning point for the overall performance of the ABB group. Heavy industries have bottomed after years in the doldrums, which means that most markets including process, power and infrastructure are now growing again. ABB is the global leader in process automation, a $100bn market largely driven by heavy industries. Recall that ABB had to fight activists in 2016 to defend its conglomerate structure and the slower than expected turnaround of its power grid business. In this context, management’s target of double-digit compounded annual growth in operational EPS over 2015-20 appears reasonable.

Third, ABB’s technology investments are paying off. The company is well advanced on its digital journey, which presents an opportunity to shift its business model from equipment supplier to solutions provider. According to Guido Jouret, who joined as Chief Digital Officer last year after serving at Cisco’s Chief Technology Officer, “ABB Ability” – the company’s digital-industrial ecosystem of connected devices, systems and services, already powers more than 180 industrial internet solutions of which 60 entirely cloud-based, such as analytics, asset management, remote monitoring, simulation, and many others. In contrast to GE’s Predix platform, which covers the entire technology stack and focuses on high-value distributed assets, ABB Mobility leverages Microsoft’s Azure cloud infrastructure and IBM’s Watson. Large customers have been receptive to the initiative, leading to enterprise engagements with the likes of Volkswagen, Man Diesel & Turbo, Nestle, Shell and Storaenso, among others. ABB argues it has an installed base of more than 70m connected devices that can leverage Ability, including motor drives, control systems, and industrial robots.

ABB sees Artificial Intelligence as a long-term game changer and is investing aggressively to lead in the transition from automated systems to autonomous systems. ABB Technology Ventures has deployed more than $200m since its launch in 2009, into the likes of Vicarious, which develops AI for robots and factory automation and is backed by a who’s who of California technology, Bonsai, which helps simplify the implementation of AI models, as well as Clearpath Robotics and PointGrab, which provides IoT smart sensors to the building automation industry.

ABB demonstrated top-notch robotics applications including the smallest shoe factory in the world, which can make a shoe from scratch in under 6 minutes (here). Most impressive in our view was a high-speed picking system, which was capable of picking parcels and packages of various shapes on a high-speed conveyor, using a six-axis industrial robot, advanced machine vision and a suction cup manipulator. At ROBO Global, we think Logistics is one of the most promising applications for Robotics, Automation and AI, as discussed in detail in “A look into logistics automation”. Yumi (You and Me), the dual-arm collaborative robot which can work in close proximity to humans without cages or fences, can be taught a process by being physically guided through it, eliminating the need for complex programming and coding. But more interestingly, Yumi is already moving from teaching to learning. Earlier this year, ROBO Global advisor and Professor and Chair of the Industrial Engineering and Operations Research Department at UC Berkeley, Ken Goldberg demonstrated a highly reliable robotic grasping solution based on deep learning neural networks. VIDEO here.